John has been a member of the Sangamon County Board for the last 10 years representing Springfield’s north end.

While on the county board he was instrumental in the merger of the City & County Health Departments. Through that merger the City of Springfield achieved savings of over 10 million dollars during the past nine years.

As a member of the Buildings and Grounds Committee John worked with his committee to upgrade all mechanical units and lighting fixtures throughout the county buildings. These upgrades have already resulted in over one million dollars in savings.

John is looking forward to bringing his experience in county government to the City of Springfield as your next alderman. 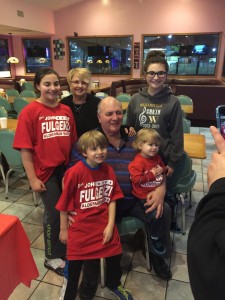 John and his wife Sandy own operate Fulgenzi’s Pizza and Pasta, a north end landmark for 36 years.

John and Sandy have three boys – John-John, Jeff, and Joel who attended grade school and high school on the north end.